Every one has heard that America's founding fathers grew hemp. George Washington, Thomas Jefferson, just to get started. But most people don't know why things changed, or when. Jack herer, and myself found this to be terribly important, as should every social studies class in the nation. Worthy of note, just to connect some dots, are the towns of HEMPstead, Long Island; HEMPstead County, Arkansas; HEMPstead, Texas; HEMPhill, North Carolina, HEMPfield, Pennsylvania, all named for "HEMP".

Heard of canvas? That would be cloth made from, you guessed it: cannabis. Levi Strauss thought it was pretty good stuff. So did the pioneers that covered their wagons with it.

Until about 1800, hempseed oil was the most consumed lighting oil in America and the world.

Until the 1870s, it was the second-most consumed lighting oil, exceeded only by whale oil. It was then replaced by petroleum, kerosene, etc., after the 1859 Pennsylvania oil discovery and John D. Rockefeller’s 1870-on national petroleum stewardship.

In 1850 there were 8,327 hemp plantations (minimum 2,000-acre farms) growing cannabis hemp for cloth, canvas and even the cordage used for baling cotton.

In 1865, there were no slaves to harvest hemp, and no machinery to do the job. Most of the plantations were located in the South or in the border states, and the lack of labor defused the hemp industry in the United States, and from that point, most of our hemp came from outside the country

By 1916, the USDA forecast that a decorticating and harvesting machine would be developed, and hemp would again be America’s largest agricultural industry.

As predicted, in 1916, 50-year-old George Schlichten created a simple yet brilliant invention. He spent 18 years and $400,000 on the decorticator, a machine that could strip the fiber from nearly any plant, leaving the pulp behind. WWI took a toll on the economy though, and the decorticator was shelved.

It resurfaced in the 1930's, when it was touted as the machine that would make hemp a “Billion Dollar Crop”. Once again, the burgeoning hemp industry was halted, this time by the Marijuana Tax Act of 1937.

In 1935 alone, 116 million pounds (58,000 tons) of hempseed were used in America just for paint and varnish. The hemp drying oil business went principally to DuPont petro-chemicals.

Until 1937, 70-90% of all rope, twine, and cordage was made from hemp. It was then replaced mostly by petrochemical fibers (owned principally by DuPont) and by Manila (Abaca) Hemp.

In 1938, Popular Mechanics and Mechanical Engineering introduced a new generation of investors to fully operational hemp decorticating devices. Because of this machine, both publications said that hemp would soon be America’s number-one crop. The agriculture industry was the last to know, that hemp was about to be criminalized.

In 1942, after the Japanese invasion of the Philippines cut off the supply of Manila hemp, the U.S. government distributed 400,000 pounds of cannabis seeds to American farmers who produced 42,000 tons of hemp fiber annually until 1946 when the war ended.

And then, prohibition against marijuana, a term few Americans had ever heard for hemp/cannabis, was put into practice. 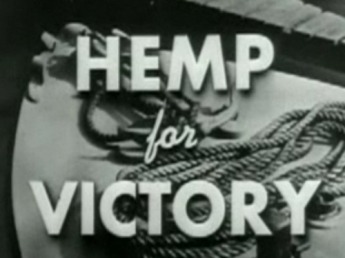